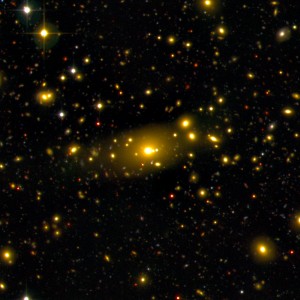 Dr. Aliş and his research group’s project is titled as “Evolution of Brightest Cluster Galaxies in the Optical and Near-Infrared Wavelengths“. The group is aiming to investigate the evolution of brightest cluster galaxies (BCGs) in the optical (MegaCam; u,g,r,iz) and near-infrared (WIRCAM; Ks) wavelengths based on the data obtained from the Canada- France-Hawaii Telescope Legacy Survey (CFHTLS) W1 and W4 fields. Approximately 100 square degrees of survey fields will be examined where we will be investigating galaxies between 0.1 < z < 1.2 redshift range. There are roughly 3000 galaxy clusters were detected in the CFHTLS W1 and another 1000 of them are expected to be discovered in the W4. Therefore, in the project we propose nearly 4000 BCGs will be examined. Throughout the project 2 PhD and 1 MSc student will be supported with scholarships. A rough budget of the project is 283.000 TL. There will be a national workshop organized on the topic of determining redshifts of galaxies as the team also is involved with the Spectrum-Roentgen-Gamma collaboration follow-up program which will be carried out with the RTT150 telescope of the TUBITAK National Observatory.